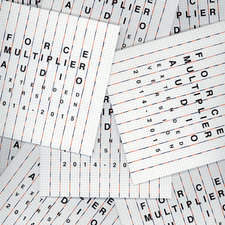 The project entitled, "Force Multiplier Audio" deals with synesthesia and it began very organically during the second half of 2014.

At the time, I was in discussion a limited edition print company called Grove and Ceremony. I had already done a print edition with them at the beginning of 2014 and they were wanting to know if I would be interested in doing a second project.

Early in our conversations, I was asked me if I had any ideas for something auxiliary that could accompany the print and be a special interactive feature for the purchaser. Before I even knew which piece of mine that we were going to use for the print, I had a strong feeling about making a compilation of music.

While considering what the compilation could be, I thought of a drawing I had made earlier in the summer. It was one from my serial Moleskine journal drawings that are built around the idea of form-making by counting on the grid. I have never had a steady drawing practice and working explicitly on the grid was new for me. I gave the series the title, “Force Multiplier” a term I had recently learned, because a “force multiplier” is an element that when introduced into an arena or system of production, radically maximizes it’s effectiveness or output. I have been drawing almost daily for the last year and a half. 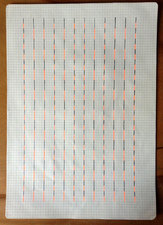 The specific drawing I was thinking about was the 41st in the series. It is composed of twelve vertical bars or strips of alternating metallic silver and fluorescent orange lines. All the intervals of spacing are counted on the grid. Four squares of space horizontally between each of the twelve drawn strips. The alternating silver and orange lines are either two or four squares. The entire layout has the bilateral symmetry of a palindrome (2 4 4 2 4 2 2 4 2 4 4 2). When I was making the drawing I was imagining it as sheet music. The twelve vertical strips represented twelve individual instruments (they could be seen as twelve players in a live context or twelve tracks in the context of a studio recording). My idea was that the top of the drawing represented the beginning (all starting with silver) and then would move down the page toward the bottom with all ending on orange.

Once I realized the potential of actually being able to use this drawing as a musical score, the project started to fall into place. Grove and Ceremony were very receptive to the idea, so I started to cast a wide net among friends that either were musicians or made sound-based art. The parameters for the project were simple: use this drawing as a stimulus for an audio interpretation. There are no right or wrong interpretations. It can be as literal or as impressionistic as you like. The one creative constraint was that it had to be two minutes or shorter.

The Grove and Ceremony print edition with complimentary audio compilation went online in November of 2014. Soon after I decided to expand the compilation to include more friends. This new, extended version has five additional tracks and has been self-published in an edition of 300 CDs.

On Sunday, July 19th, 2015, GRIDSPACE in Crown Heights, Brooklyn hosted the release party for the compilation and new silkscreen print edition based on the original drawing. It was (thus far) the hottest day of the year in New York City, but despite the heat blitz, it was a festive celebration with live sets of music from BnDL, Kai Riedl, Gillespie Brothers, and Matthew McGee Hunter. 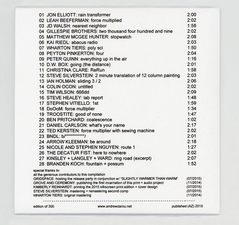 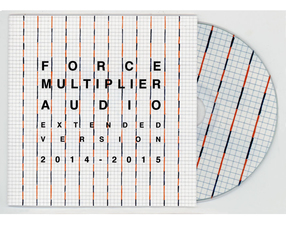 strategies from the contributors:

STEPHEN VITIELLO:
1st - is an unedited recording created with a modular synthesizer with sequencer and sampler going into a slightly pulsing output. No absolute strategies were taken in terms of translating the drawing into a score, just the eye moving along lines and trying to get my hands to keep up.


TIM WILSON:
I decided to make an algorithm to generate sequenced sound from Zarou's piece.

Reading from a grid left to right/top to bottom. The entire print is equal to 2 minutes. 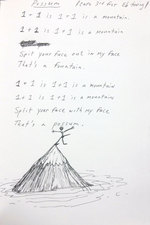 BRANDEN KOCH:
Fountain + Possum.
When asked to do this project I immediately responded to the visual rhythm of Andrew's piece as a 'given grid' permissive structure for play. My recording layers a simple three chord riff that includes a b-minor small triangular bridge chord shape between G and C minor chord shapes on the guitar neck with a capo on the third fret. Three interlocking triangles. The lyrics mimic looped grid-play system (1+1 is 1+1 is a mountain / 1+1 is 1+1 is a fountain) as in the way that a grid can be both a relentless obstacle as well as a regenerating gift. Or even at times putting the player into the position of (a possum) perhaps playing dead, in attempts to trick would-be predators. The last layer to this track is the soundscape of my two-year old son and myself playing on the playground equipment of a nearby urban park. You can hear the sound of him running over the squeaky footbridge, banging on the steel upright support poles of the contraption, rejoicing in play and conquering the grid with an affirmative "yes!”. 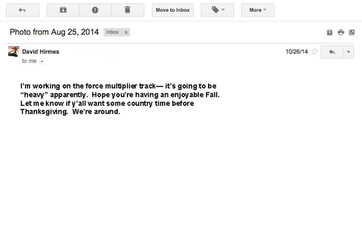 We turned that into a 12-beat drum pattern that runs through the whole piece. The basic guitar riff also uses the same binary 12-fold +/- pattern, matched to the drum pattern. We then built these 12-beat measures into a 12-part phrase, with each 12-beat measure forming one part of the 12 measure phrase that also has the same 4+4+4 pattern. Then, one more layer: the whole track has a 4+4+4 structure with an upside-down “part b” in the middle, thus recapitulating the same 12-fold pattern overall.

With the guitars and drum tracks all done, it still sounded a bit dry, so we mixed in some heavily modded monster noises to bring in the necessary emotional content.

The pattern is palindromic, so if you play the whole track backwards, it has exactly the same structure and “melody” as it does played forwards. This is also true of Andrew’s art piece— it looks the same reflected in a mirror, not accounting for minor organic differences.

CHRISTINA CLARE:
ReRun was recorded through multiple single track layering using two I phones. This process occurred nine times. Nine being a number that to me, is very prominent in Zarou's work Force Multiplier.

MATTHEW MCGEE HUNTER:
"Stopwatch" is a condensed version of a weaving and winding guitar + piano piece that originally was close to 1/2 an hour long. My hope was that the the light, airy, and hopefully balanced feel of the piece would well compliment Andrew's image. The title comes from, duh, how I chopped the music down to 2:00.


BEN PRITCHARD:
I was trying to literally interpret the manner in which I perceived the print which is very clear, very precise. I failed miserably. The playing was not good even to my mediocre standards! As with all things important in life I said " duck it" and played thinking about the mind of Andrew Zarou. 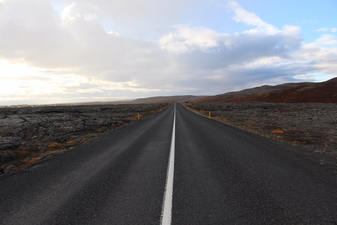 DEAN HADDOCK / THE DECATUER FIST:
The Decatur Fist / Zarou / Force Multiplier collaboration was an opportunity to refine an idea that I had been experimenting with before meeting Zarou. "From Here to Nowhere" starts with the line, "Molly said there was life on the bus for the both of us," which was inspired by Tom Wolfe and Jack Kerouac. The mostly linear, somewhat concrete drawing took me back to the lines I watched folding out from under the car on road trips in my youth and then to the lines connecting and dividing us all. The drawing isn't literal, but neither is the song. I was grateful for the invitation to participate in the project because, were it not for Zarou, I'm not sure the song would have ever left my notebook.


JON ELLIOTT:
Zarou’s drawing looks like vertically oriented MIDI information, and my piece was designed to loosely mimic the pattern of your drawing. MIDI raindrops.